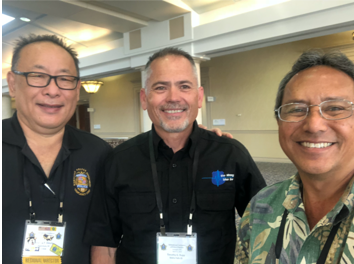 Late last year I contacted Honolulu (Hawaii) PD Chaplains Andy Kikuta and Keoki Awai about the possibility of taking a Winning a Gunfight seminar to the Islands in October of 2020. Both chaplains are friends and we have discussed the possibility of a seminar in Hawaii for a couple years. Andy wrote me in a December email:

In light of what we are facing today in our culture, your seminar would be very helpful. Please pray for our officers as we have had a lot of officer involved shootings here. No line of duty deaths but suspects killed in the confrontation with law enforcement. (Emphasis mine).

Things changed. In mid-January, landlord Lois Cain had 69-year-old Jerry Hanel evicted from the home he was renting. Honolulu PD officers were very familiar with Hanel. He had a habit of making false 911 calls and then berating the dispatcher when the police didn’t do his bidding. On Sunday morning, January 19, veteran HPD Officers Tiffany Enriquez and Kaulike Kalama responded to a call for a disturbance at Hanel’s residence. The officers arrived and found the landlord laying in the driveway suffering from a stab wound to her leg. While assisting the wounded woman, Hanel ambushed Officers Enriquez and Kalama and shot both officers dead. Hanel dragged Cain back into the house, set the house on fire, and burnt it to the ground. The bodies of Cain and Hanel were later recovered from the rubble.

Hanel not only had a history of menacing behavior, he also had a history of violence and threats against his neighbors. One neighbor had a restraining order against him for threats. The restraining order prohibited him from having a firearm. Hanel’s lawyer is quoted as saying why he was in possession of a firearm is “anybody’s guess.”[1] Banning guns does not prevent criminals from obtaining them, nor are guns the threat. Jesus taught, “For from within, out of the heart of man, come evil thoughts, sexual immorality, theft, murder, adultery,coveting, wickedness, deceit, sensuality, envy, slander, pride, foolishness. All these evil things come from within, and they defile a person” (Mark 7:21-23).

Please do as Chaplain Kikuta requested a month before this tragedy and pray for the officers of the Honolulu PD. Include in your prayers Chaplains Kikuta and Awai as they minister to the officers and their families. Finally, pray about the opportunity to present a Winning a Gunfight seminar to the Honolulu PD.

Early last year, an officer consulted me about some struggles he was having adjusting after a critical incident. This really opened up my eyes to the need for a professional law enforcement chaplain program in our community. The problem was, I didn’t have any experience with the type of program I envisioned. I prayed about it but tucked the idea away in the back of my mind. Then I received an email from retired California Highway Patrol Sergeant Dale Waaler. Dale told me how much he enjoyed reading Winning a Gunfight. I asked how he came across the book and he said his daughter, Chaplain Christa Trinchera of Law Enforcement Chaplaincy Sacramento (LECS) picked it up at a seminar I did in Sacramento. Dale then said that Christa and her husband Gio want to move to Idaho Falls and start a chaplain program modeled after LECS. Coincidence? I don’t believe so. Law Enforcement Chaplaincy of Idaho (LECI) is coming soon! Here’s a link to a media report on the LECI. I’ll be sharing more information in the future.

On January 30 and 31 I was honored to speak at Leon Valley Baptist Church’s annual men’s conference. The conference was truly a blessing with some 200 men in attendance over the two days. I reconnected with old SAPD friends and met current SAPD officers and officers from other agencies. Thank you Pastor Forrest Jones for inviting me to speak!

February begins speaking in the morning service at Leon Valley Baptist Church and then a trip to Oregon for chaplain training with Region 2 of the International Conference of Police Chaplains. This time I’ll be a student, not an instructor.