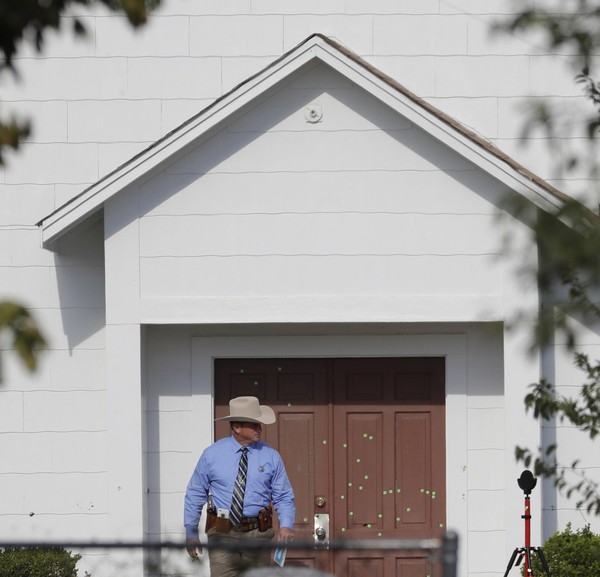 Pastor Frank Pomeroy of First Baptist Church Sutherland Springs, Texas is a friend. Nearly twenty years ago, our families served together at First Baptist Church La Vernia, Texas (Click here for my interview by Local News 8). The news of the massacre in the small rural church rocked the faith community. But it should not have surprised us; the handwriting has been on the wall for some time. For me the 2012 Sandy Hook shooting in Connecticut was a wake-up call.

After retiring from the San Antonio Police Department in 2007, moving to Idaho Falls, and becoming a full-time pastor, I carried my pistol sporadically, to say the least. The Sandy Hook massacre changed that, and I resumed carrying my pistol whenever I was in public—including when I was in the pulpit.

I informed the elders at River of Life of my decision to be armed during the service and they supported my decision. In fact, we took it a step further and decided to train an armed team to protect our church in the event of an attack. Drawing from my law enforcement background, I trained our team to respond to an active shooter incident. At the same time, I started looking for resources to help explain our decision to the congregation, form a policy, and prepare team members to use deadly force. I searched for books and attended church security seminars, but still didn’t find a resource. In 2015, I decided to write a book to help church leaders and congregations to prepare for an active shooter incident. Pistol in the Pulpit is that book and was the catalyst for Winning a Gunfight and The Strong Blue Line ministry.

My son Aaron and I began training churches how to implement an Armed Safety Response Team through Rupp Shooting Academy. But, personal time constraints and a higher demand for the Winning a Gunfight and the Pistol in the Pulpit seminars have necessitated the closing of Rupp Shooting Academy. The seminars will now be part of The Strong Blue Line ministry. For more information, seminar locations, and dates go to: The Strong Blue Line Seminar/Training page. Please keep these ministries in prayer.

Eight years ago, Police Chaplain Jim Bontrager (Elkhart, ID PD) started a Law Enforcement Appreciation Day in Elkhart, Indiana. Every year the special day gets bigger and better. The event has been dubbed “Breaching the Barricade” and features many exciting events, speakers, fun, and games for officers and their families. This year the featured speaker was author and former homicide detective J. Warner Wallace (who also appeared in the movie God is Not Dead II). Chaplain Bontrager said Mr. Wallace is the “best communicator to law enforcement hands down!”

Chaplain Bontrager also reported 233 law enforcement families, from 55 different agencies in 11 states attended, which amounted to over 1000 people in attendance. More importantly, he reported that many spiritual seeds were sown, inroads made into several agencies, and the event was a launching point to put troubled marriages back on track. Chaplain Bontrager also made Winning a Gunfight available and purchased 50 books to distribute, thanks Jim!

We had a PayPal issue with our website. If you tried to make a purchase or donation in the last month or so, it’s likely your transaction didn’t go through. Please give it another try. If you’re not sure, email me and I’ll check. I’m sorry for the inconvenience and thank you for your patience! Click the donation button in the sidebar to make a transaction.

“How’s Cop Church going?” is a question I’m often asked. It’s going great! Word is spreading, and we’ve had nothing but positive feedback and encouraging words from those who’ve attended. That doesn’t mean we’re not without our critics. We’ve had a few negative comments and threats on social media, and most recently a stolen “Cop Church” banner! The officers involved with Cop Church, brush off comments without much more than roll of the eyes and a joke. But, our civilian support base expressed shock at the “attacks.” It’s been a good lesson for them to see how law enforcement officers are routinely disparaged. But, rather than being discouraged, these mild “attacks” only reaffirm our resolve to get the gospel to our law enforcement officers. Most encouraging for me is the commitment of the leadership team and the continued support of those who are partnering with us in this ministry.

May you and yours have a blessed and merry Christmas and happy New Year.