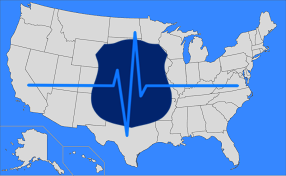 Great news, the trip to Sacramento is a go! On January 9th, I’ll be speaking to several officers from the Sacramento area who have been involved in shootings. Each officer will receive a copy of Winning a Gunfight. This is the first trip of 2019 that promises to be one of travel from California to Florida and places in between. Please keep the ministry in prayer as speaking engagements are being finalized. More good news, all the money has come in to provide books for Jimmy Meeks’ Coeur d’ Alene Sheepdog Seminar in March.

In 2018 there were 148 police officers killed in the line of duty. A record 52 were killed by gunfire, but gunfire isn’t the only threat to officers, the second leading cause of officer death was vehicle crashes. In the early afternoon on Christmas Eve, when most of us were finalizing our Christmas plans, Detective Diedre Mengedoht was at work. The 32-year-old mother was on duty for the Louisville (KY) Metro Police Department and stopped a pick-up truck on I-64 for a traffic violation. Moments later her police cruiser was rear-ended by a large truck that smashed her car into the back of the pick-up truck, causing the police cruiser to burst into flames. Detective Mengedoht was standing between the two vehicles. She is survived by her son. The day after Christmas 33-year-old Corporal Ronil Singh of the Newman (CA) PD was gunned down. Ronil leaves behind a wife and five-month-old baby. Pray for the family and loved ones left behind and the officers of the Louisville Metro and Newman departments.

My book Vengeance is Mine is required reading for the Introduction to Law and Society class I teach online for the College of Eastern Idaho. At the end of the semester, I ask students to share something that impacted them from the class. Here’s what one student wrote:

“I have a funny story about Vengeance is Mine. My mail is sent to my parents’ house and I asked them to be on the lookout for my college book. After a long time, and after I had asked several times if they received the book, I was about to order another copy. A couple days before Thanksgiving, I was sitting in my dad’s chair and saw THE book! It was all bent and looked read through. I said ‘DAD! This is my college book!’ He said, ‘Oh my gosh I thought someone sent that to me unknowingly thinking I might need to have a lesson or two on forgiveness through struggles.’ I called my dad and my brother and some of my friends from church asking if they sent me this book, all of them said they had no clue what I was talking about!’ The book has made it through my mom and dad and now the people who my dad thought sent it to him are on the list to read it next. The book was amazing, and it was the biggest take away from this class for me personally. I learned valuable lessons from the characters, and it came at a time in my life when I needed it.”

Keep the book ministry in prayer!

While in Arkansas last month I visited Lakeview Baptist Church in Cave Springs. Pastor Johnny serves as chaplain to the Cave Springs Police Department, donations made it possible for The Strong Blue Line to provide copies of Winning a Gunfight for Pastor Johnny to give to each member of the department.

Cop Church was privileged to help several law enforcement charities last month. These included Shop with a Cop and Coats for Kids. Pastor Gordon Boyle will be preaching in my absence for the January 8th service. His sermon is titled, “What is Truth”. If you are in the area, come out and support Cop Church and get to know an officer or two from the community. Last month Pastor Gordon mentioned that there are four pastors who minister at Cop Church. The four pastors are: Pastor Gordon (Watersprings) a retired deputy from Bonneville County, Pastor Ty Orr (Watersprings) whose brother is an Idaho State Police officer, Pastor Mike Glaser (Cornerstone Pentecostal) who also serves as a Bonneville County Jail chaplain, and me (River of Life) a retired San Antonio officer all serve with many others to.