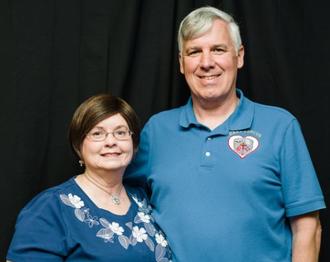 It was Sunday, and as usual, off-duty Ft. Collins police officer Mike Swihart was at church with his wife Linda. Four years earlier, he was dispatched to a traffic accident where a driver suddenly pulled a gun on Mike and shot him. He returned fire and shot the suspect. It had only been a little over a year since Mike returned from the Persian Gulf War where he served as a Military Police Company Commander. The Swihart’s were also certified EMTs—violence and trauma were familiar companions. But this day they were at church. Church is safe.

At the beginning of the first song, an ex-husband entered the sanctuary, walked up to his former wife, and elbowed her to move over. The pastor saw the incident and escorted the couple outside to talk. Uneasy, Mike went to see if the pastor needed assistance. He walked toward the couple who were arguing in the parking lot. Mike was 10-15 feet away when the man suddenly pulled a 9mm pistol and shot his ex-wife twice in the heart. Instinctively, Mike drew his gun, and pushed another man out of the way. The assailant turned and pointed his pistol at Mike—both men fired. The assailant’s bullet hit Mike’s left thumb, careened into his chest, and punctured his right lung. The assailant was still standing, and shooting. Mike fired two more shots and was hit again. The second bullet entered his left side, broke a rib, went through his stomach, and into his spleen, pancreas, and a kidney. Mike fired again and the assailant went down.

Linda came out of the church, not knowing what happened, but saw the assailant and woman receiving medical care. Then she saw Mike and his blood-soaked white shirt. “Oh my gosh, have you been stabbed or shot?” she asked. “I’ve been shot,” Mike replied. Miraculously, he recovered. Mike still carries a 9mm bullet in his chest; he told me that he’s not a fan of that cartridge—I guess I can understand why! You can hear their story on YouTube as told to Cop Church Chattanooga by clicking the link: The Mike and Linda Swihart story.

Mike won the gunfight physically, and more importantly, both he and Linda won spiritually and mentally. The Swiharts use their experiences to minister to combat vets and first responders across the country. Check out their website HartRescue.us.

The last week of July, I was in Kansas and Colorado for training events. The first event was the Annual Training Seminar (ATS) for the International Conference of Police Chaplains held in Wichita. It was my first trip to Wichita, and I was very impressed with the city and several officers I met who worked security at the convention center. They were both professional and friendly, I gave out several copies of Winning a Gunfight to the officers. At the ATS, I presented a three-hour seminar to about 70 chaplains based on Winning is More Than Surviving. While there I reconnected with several chaplain friends from around the country, including Jim Bontranger (Elkhart, IN), Ronnie White (Chicago Heights, IL who was elected president of the ICPC), Jonathan Parker (Howard County, TN and Cop Church Chattanooga pastor), and of course my brothers from Hawaii, Keoki Awai and Andy Kikuta.

In route to the Colorado event, I stopped at Dodge City and spent a little time visiting the historic city where some of America’s most famous lawmen (e.g. Wyatt Earp and Bat Masterson) worked. It’s also where Masterson’s brother Ed, a city marshal, was shot and killed in the line-of-duty. Although many of nineteenth century lawmen of America’s west had sketchy backgrounds, they none-the-less helped bring law and order to the wild west towns. While in Dodge City I dropped off a copy of Winning a Gunfightat the Dodge City PD. Oh, I almost forgot, the most famous lawman of Dodge City—Marshall Matt Dillon. I cut my teeth watching the Gunsmoke series based on the fictional character portrayed by James Arness.

Colorado Springs is the home of the Faith Based Security Network (FBSN) founded by Carl Chinn. I was there to speak at FBSN’s Church Security Summit; over 200 people from 29 states attended. Speakers included Charl Van Wykwho stopped the 1993 St. James Church massacre in South Africa from having even more victims and Stephen Willeford, the good-guy with the gun who stopped the 2017 massacre in Sutherland Springs, TX. It was a great conference to learn and network with others; I highly recommend FBSN for those in church security.

For our August service, Cop Church Idaho Falls sponsored a BBQ for local law enforcement officers and their families. The weather was great, and we had a good time cooking and eating together. Several families came out for the first time for food and fellowship. Keep Cop Church Idaho Falls in prayer as we look to the future and the most effective way we can minister to officers in southeast Idaho. Pray for your police.