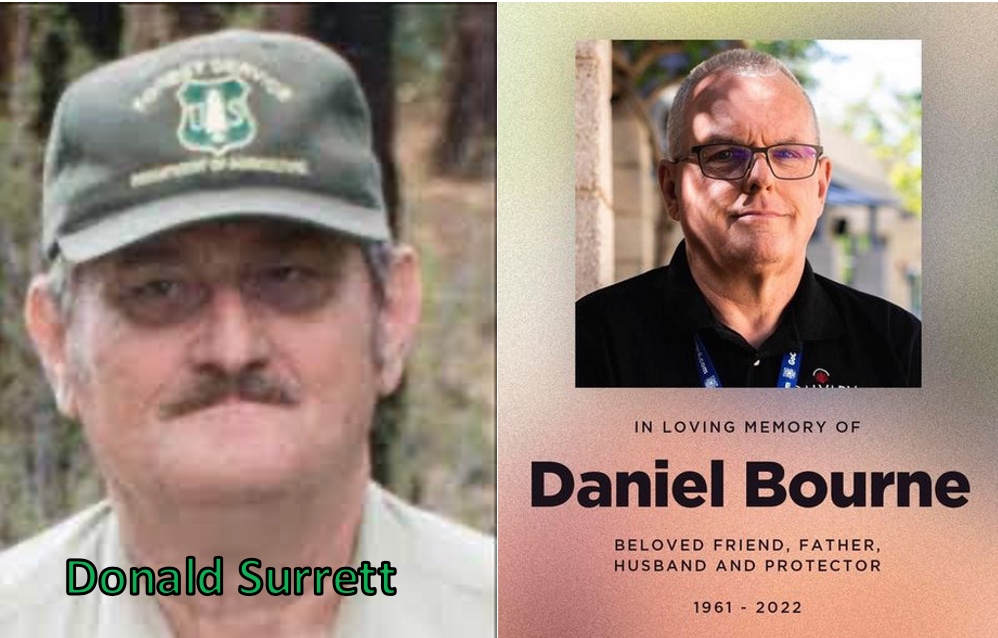 Ethan Miller showed up at a grocery store in Bend, OR to kill. On Sunday evening, August 29, the 20-year-old Miller, armed with a rifle and shotgun, randomly shot in a nearby apartment complex where he lived. He made his way to the Safeway store and continued to shoot. One witness said Miller laughed as he shot at people. Miller reportedly fired over 100 rounds during the mayhem. Inside the Safeway, he shot and killed shopper Mr. Glenn Bennet, 84. Mr. Donald Surrett Jr., a 66-year-old Safeway employee, confronted and engaged Miller in the produce section. Mr. Surrett was shot and killed. Police said there is little doubt that Mr. Surrett’s heroic actions saved lives.

Officers from Bend PD arrived four minutes after being called. The shooting was still in progress when they arrived. Miller ended his own life before officers located him. Police later executed a search warrant and found another shotgun and three Molotov cocktails in Miller’s truck.

On Friday evening, September 23, Mr. Daniel Bourne, 61, who volunteered to work security for his church, Calvary Chapel Albuquerque (NM), was checking out a suspicious vehicle in the parking lot. He was later discovered murdered, apparently ran over several times. The next day, Albuquerque PD arrested 35-year-old Marc Ward and charged him with murder.

Most citizens support the police. But there are a few, who like officers, have the heart of a warrior. God has instilled in some a heart to protect others and face evil, even while placing themselves in harm’s way. I know nothing about either Mr. Surrett or Mr. Bourne other than they were warriors who gave their lives that others might live. Jesus paid tribute to warriors like Mr. Surrett. He said, “Greater love has no one than this, that someone lay down his life for his friends” (John 15:13, ESV).

Law enforcement officers put their lives on the line for others on a regular basis. Although willing to face death, they don’t want to die. Their goal is to keep the public safe and go home at the end of their shift. What’s more, law enforcement officers rarely encounter citizens who are willing to stand in harm’s way like Mr. Surrett or Mr. Bourne did. But they too, like officers, didn’t leave their house that day wanting or expecting to give their lives to save others.

There’s one Warrior who did just that. Jesus came to earth to die. Humanity needed a Savior—a perfect sacrifice who was worthy to redeem humanity back to God. Jesus came with eyes wide open, knowing he had to die that others may live. Yet he came anyway. Jesus said this about his own ministry, “For even the Son of Man came not to be served but to serve, and to give his life as a ransom for many” (Mark 10:45, ESV). Why? Why did Jesus come, knowing he was going to die? Love. “For God so loved the world, that he gave his only Son, that whoever believes in him should not perish but have eternal life” (John 3:16, ESV).

One thing that warriors have in common with everyone else is that they need to be forgiven. We have all sinned and fallen short of God’s standard. No amount of good deeds, church rituals, or commandment-keeping will change our guilt. Nor will they ever be sufficient payment. Only Jesus is worthy to make the payment for sin. And he did. “For by a single offering he has perfected for all time those who are being sanctified” (Hebrews 10:14).

Last month I was in Olympia, WA for the annual International Conference of Police Chaplains (ICPC) Region 2 training seminar. It was good to reconnect with chaplains from across the northwest region and receive further training. While there, I also had the opportunity to teach the ICPC “Confidentiality and Liability” course and share The Strong Blue Line ministry and available resources with chaplains.

Sweet home Alabama! This month, thanks to Burke Swearingen and Blue Watch Foundation, I’m down in Alabama teaching four scheduled seminars across the state from the southeast (Dothan) to the northwest (Florence) and places in between.

Later this month, Sherry and I will be in Arkansas attending the Christian Motorcyclist Association’ Colors Rally.