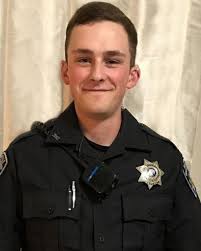 In the early morning hours of Monday, May 18th, Bonneville County (ID) deputies were dispatched to a roll-over accident in a rural area east of Idaho Falls. Deputy Ben Bottcher was the first deputy on the scene. He found a woman more than two miles from the accident walking westbound in the middle of the dark two-lane road. She was armed with a machete and frantically waved it at anyone who came close. Deputy Bottcher warned a civilian who stopped to assist to stay in his truck. Deputy Wyatt Maser arrived to assist. The deputies and the suspect were all in the roadway when a third deputy suddenly came upon the dark scene and struck Deputy Maser. Deputy Maser was critically injured and died of his injuries. The 23-year-old Air Force veteran leaves behind a wife and 10-month-old daughter. Pray for the Maser family, the BCSO deputies, and their families.

Less than 48 hours later, Hammond (LA) PD officers pursued a fleeing vehicle through their city. Other officers, including Louisiana State Troopers joined the chase. In an attempt to disable the suspect’s vehicle and end the pursuit, a tire deflation device was deployed. After the suspect’s vehicle ran over the spikes, Trooper George Baker went to retrieve the deflation stick. He was struck by a fellow officer who was pursuing the suspect. On May 24th, 33-year-old Trooper Baker succumbed to his injuries. He too leaves behind a wife and daughter. Pray for Trooper Baker’s family, the officers, and their families.

The Law Enforcement Chaplaincy of Idaho (LECI) is sponsoring a fundraiser to provide the officers we serve with Guardian Angel Safety Lights. These are lightweight, high-visibility strobe lights, that are worn on an officer’s uniform and are easily activated at the push of a button. No more worrying about donning a clumsy safety vest. If you would like to donate to help support LECI’s efforts click here.

Tragedy strikes in Florida. Fish and Wildlife Conservation Officer Julian Keen was found shot to death Sunday morning, June 14, 2020 in Labelle, east of Ft. Meyers. Officer Keen was off duty at the time of the shooting and taking action in a hit-and-run accident. Three suspects were arrested. Officer Keen was a beloved officer in the community he served. Hendry County Sheriff Steven Whidden commented, “We all knew Officer Keen, and he wasn’t only our brother but a role model for the community. He will be missed.” The Florida Highway Patrol Command Officers Association described Keen as “A genuine officer who would literally give the shirt off his back to anyone who needed it.” The 30-year-old officer was a high school football star, alligator wrestler, and six-year veteran officer. He will be dearly missed by his family, friends, co-workers, and community. Please pray for those left behind.

In April’s newsletter, I mentioned that I received a letter from a county jail inmate named Corrie. He said he was a recovering addict and was reading Vengeance is Mine that was given to him by Pastor and Chaplain Mike Glaser. Corrie asked if I wrote any more books, especially one with a biblical theme. I gave Pastor Glaser a copy of Warriors for the Faith and Vengeance is Mine Too to give to Corrie. In May, Corrie wrote me again. He finished all three books and wrote, “I have read ‘Warriors for the Faith’ 3 times. I am understanding the scriptures very well the way…you write and explain with stories.” Continue to keep Corrie and the book ministry in prayer.

June 28th was my last Sunday at River of Life; ending a ten-year ministry. I’m now embarking in fulltime ministry to law enforcement officers. Many people have mentioned the Divine timing of this transition and the great need among our nation’s officers. Please keep Sherry and me in your prayers as we seek support and ministry opportunities.

Good News—Cop Church Idaho Falls will relaunch this fall! We are making several changes to better serve law enforcement officers and their families. Now, more than ever, this type of ministry is needed in our country. More information will be forthcoming.