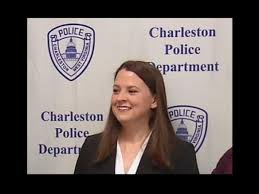 On Tuesday, December 1, 2020, at about 2:30 pm, Charleston (WV) Police Officer Cassie Johnson was dispatched for a parking complaint. Officer Johnson arrived to investigate the minor infraction and found Joshua Phillips, 38, had illegally parked his vehicle on private property. The property owner called the police to have the vehicle removed. The officer contacted Phillips, who refused to cooperate and became combative. Officer Johnson attempted to arrest Phillips, who fought being handcuffed. During the struggle, Phillips withdrew a pistol from his waistband and shot the officer in the face. Officer Johnson returned fire and struck her assailant twice. Phillips fled on foot and was arrested a short time later. He was booked by proxy into jail for attempted murder. The wounded officer was rushed to the hospital with life-threatening wounds.

The next morning Police Chief Hunt was optimistic, “Officer Johnson was struck in what would normally be a fatal wound. But in the true fighting spirit of the Charleston Police Department, and those who are truly called to serve, she is a fighter. She has a pulse. She’s not out of the woods, she is going to be recovering. And do we pray…oh do we pray that she makes a full recovery.” Charleston Mayor Amy Goodwin also requested prayer, “Not only do we need your prayers tonight for Cassie, but we need prayers tonight for her mother Cheryl, her sister Chelsie, but also for our first responders who make these calls every single day.”

Reality hit Wednesday afternoon when it was announced Officer Johnson would not survive her injuries. She was removed from life support and her organs were harvested that others might live. The charges filed against Phillips were upgraded to murder. Officer Johnson served just shy of two years, she was sworn in as a police officer in January 2019.

Does Officer Johnson’s death mean God doesn’t respond to our prayers? No; the Bible instructs us to pray, “Is anyone among you suffering? Let him pray.”[1] God answers prayers of faith. The text continues, “And the prayer of faith will save the one who is sick, and the Lord will raise him up.”[2] This raising up may not be in this life. But more importantly, the eternal raising is assured to those who are forgiven through faith in Christ. “And if he has committed sins, he will be forgiven.” Death was defeated on the cross, “Death is swallowed up in victory…thanks be to God who gives us the victory through our Lord Jesus Christ.”[3] Why was Officer Johnson taken so young? I don’t know, and we may never know this side of heaven. Keep the Charleston PD and Officer Johnson’s family in prayer as they deal with the tragic loss.

It’s finally official! In December, the Idaho Falls PD (IFPD) and the Bonneville County SO (BCSO) each signed a memorandum of understanding with the Law Enforcement Chaplaincy of Idaho (LECI). Idaho Falls city council voted 6-0 to allow LECI to partner with IFPD and Mayor Casper signed the agreement. Captain (and Sherriff-Elect) Sam Hulse signed for the BCSO. In just the short time we’ve been available to officers from both agencies, we’ve had several officers contact Chaplain Christa or me for advice and/or counsel. Further, we have received positive feedback from both rank-and-file LEOs and command staff.

Chaplain Christa and I presented the LECI to officers of the IFPD during their quarterly training. Over the course of four sessions, we presented to nearly all 100 or so officers of the IFPD. The presentations were well received, and the officers look forward for chaplains to be available as a resource for help with victims and/or personal support and counsel.

Cop Church’s relaunch continues to go well! Last month, an officer, who has yet to attend Cop Church in person, told me that he started listening to the Cop Church sermons after he was involved in a shooting. He thanked me for the Cop Church ministry and said the sermons were very helpful. Sermons are archived on the website and can be accessed for listening.

Gone Country! Cop Church is partnering with Cowboy Church to bring the 2004 Christian Entertainer of the Year Clifton Jansky to Idaho Falls on March 7th for a night of worship. We’ll have more information up soon on the website and Facebook page.

Nate Harder contacted us via the Cop Church website and requested I contact him. Nate and his wife recently started Protectors’ Peak ministry to LEOs in northern Idaho. The website says, “Protectors’ Peak is a place where Shepherds and Sheepdogs can come to rest, renew, and reconnect with God.” Nate still serves as a police chief in a bedroom city to the Twin Cities but plans to retire and move to Idaho to serve LEOs fulltime when the time is right. If you are in the Twin Cities area, you might want to check out their upcoming Protectors’ Peak Faith Conference in Forrest Lake, MN, just north of Minneapolis. In the future, we hope to partner with Protectors’ Peak to provide resources for LEOs and their families to “rest, renew, and reconnect.”

Throughout 2021, BlueWatch in the Birmingham, AL area, is hosting a Strategic Leadership Series. For more information click here.

Pastor Ty was under the weather last month and asked me to speak on December 16th. The link to the video is here.