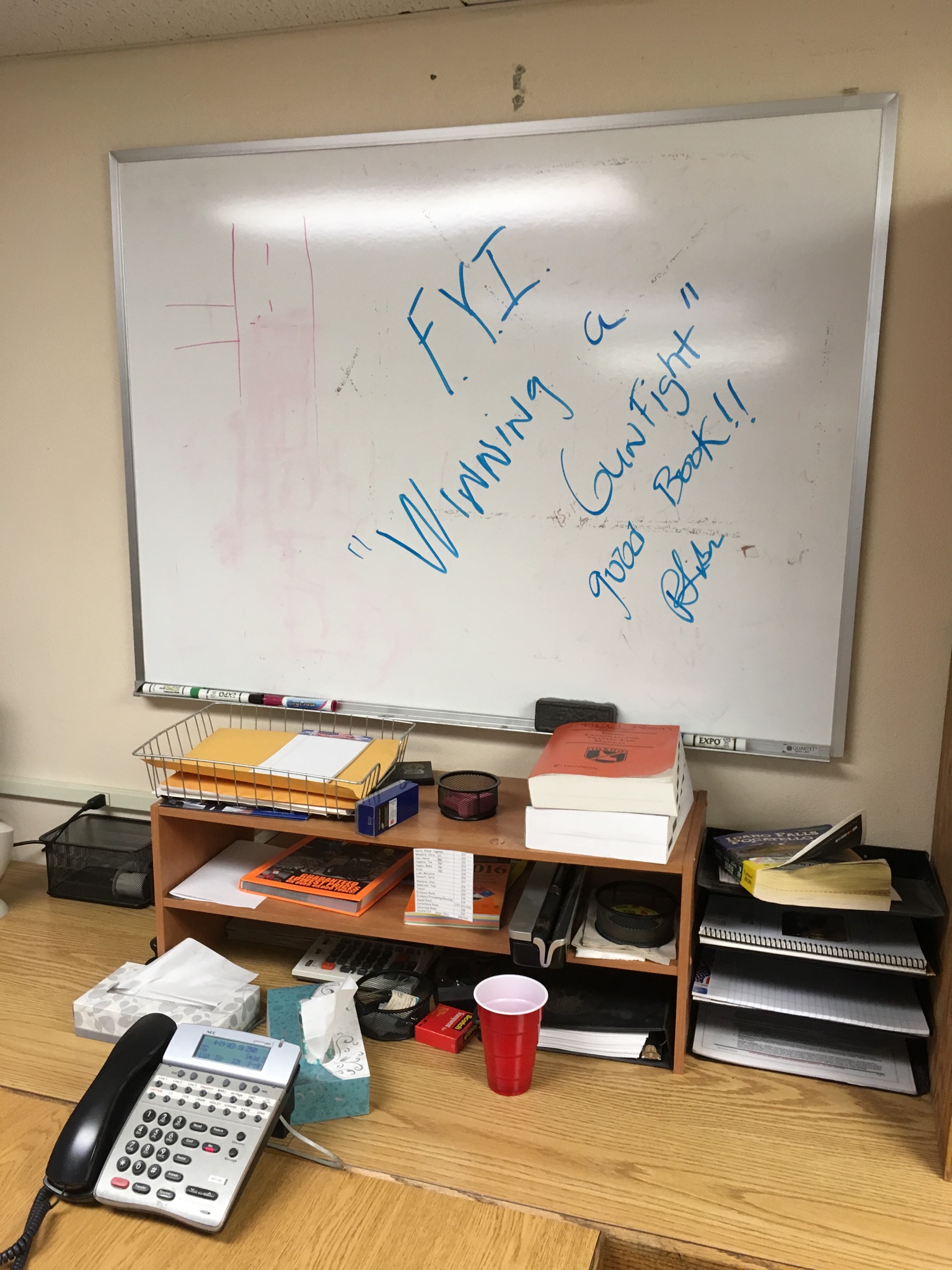 A great example comes from Sergeant Tony Anderson (Idaho State Police). Tony and his wife have purchased several books for the officers who work with Tony. Recently, Tony sent me a text with a picture attached. The picture was of a whiteboard that read, “FYI ‘Winning a Gunfight’ good book!!” followed by the officer’s signature. Tony explained, “I walked into the squad room and this was written on the whiteboard. I thought you’d like to know.” “Would I like to know?” You bet! Thanks, Tony. In addition to his regular patrol duties, Tony is also a police instructor and has purchased books to give to the officers he instructs.

Hence, for The Strong Blue Line ministry to have a greater impact please consider making personal contact with your pastor, local police chaplain, or local missions leaders in your area and encourage them to support the ministry. You may even consider leading a campaign to purchase books for officers in your area. Contact me (at the bottom of this page) if you are interested; I would love to give you some help getting started.

Pastor Kevin Norton, Hibbing Alliance Church (MN), is a chaplain with the St. Louis County Law Enforcement and a member of the International Conference of Police Chaplains. He heard about Winning a Gunfight through Alliance Life magazine and emailed me, “Tim, thank you for this book. It speaks directly to officers in a way in which many similar books don’t but would like to. As a pastor and a chaplain, I am always looking for material that isn’t preachy but embraces God’s truth. Winning a Gunfight is that kind of language. I do hope to order a bulk of books soon for free distribution.” Thank you, Pastor Kevin for your kind words!

I emailed Kevin and asked him how he heard about Winning a Gunfight. Here’s his follow-up email:

Hey Tim, I was perusing our denominational magazine, “Alliance Life” and an ad for “The Strong Blue Line” caught my eye. So I checked you out. I definitely can see LEO’s [law enforcement officer’s] reading this. Our small department in Hibbing, MN, where I live, just had a shooting recently where two officers shot a suspect (who lived). But that is highly unusual in these parts, so it shook them up. As I read the material off your website I realized this would be a valuable tool for these guys and others who may have not yet had such an experience but are on the front lines every day. Kevin.

5-4-17 Pastor Nathan Seckinger, a chaplain with the Pennsylvania State Police contacted me about getting books for the state troopers he serves. Pastor Nathan purchased five books to give away and because of donations to The Strong Blue Line, I was able to send him an additional five books to give to troopers of the Pennsylvania State Police and a book to keep for himself as reference.

5-20-17 Last month I mentioned a church security conference in southern California where Carl Chinn was slated to be the guest speaker. Carl agreed to make copies of Winning a Gunfight available at the conference and promote The Strong Blue Line. Carl also agree to give free copies to police officers who attend. Here’s Carl’s report,

I told everyone I would not sell any until law enforcement got theirs. One guy raised his hand and asked if that applied to Military Police as well. I made a snap decision and said yes. Another asked if it applied to active duty military. I said, “After law enforcement has gotten theirs, you can show them how much you appreciate them by buying yours.”

Law enforcement snatched up all but 5, and I sold them at full price plus one guy gave me an extra $5.00. Others were asking about Amazon after they were all gone.

I gave one to the pastor as well. He wasn’t law enforcement, but his son was killed in the law-enforcement line of duty.

Thanks Carl! Please pray for the officers in Southern California who received the gospel, via Winning a Gunfight!

5-31-17 Jimmy Meeks (Sheepdog Seminars) was driving through Idaho enroute to Portland, OR for a church safety seminar with Carl Chinn. Jimmy has been instrumental in delivering copies of Winning a Gunfight from Texas, to Florida, to Pennsylvania. It was good to get to know Jimmy and spend some time with him.