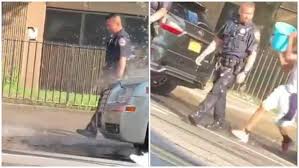 Recent stories of New York police abuse caught my eye this month. But it’s not what you might think, officers weren’t abusing people, they were the objects of abuse. As of the end of July there have been at least four separate “water attacks” on NYPD officers. Video footage show officers being doused with water while trying to make arrests or go about their duties. Although the attacks haven’t caused injury, they highlight the growing lack of respect for our nation’s law enforcement officers. Some may take these attacks lightly and regard them as a passing fad—I beg to differ. Recently I was talking with a young officer and told him that when I was a young officer, we arrested people who used profane language against officers or “flipped-off” officers. He was shocked that it was actually against the law, but things have changed—Federal Courts decided that profanity and obscene gestures directed at officers are constitutionally protected speech.[1] It began with words and gestures—now it’s physical assault with water. What’s next? More importantly, what causes such behavior?

Behavior comes from the heart. At issue is a lack of respect for authority, and the Bible tells us that all governmental authority is sanctioned by God, “For there is no authority except from God, and those that exist have been instituted by God” (Romans 13:1b). Antagonism against legitimate authority is ultimately antagonism against God. In America we have systems in place to combat improper behavior from government officials and illegal attacks are not legitimate and only lead to division. Pray for the officers on the front lines who are subject to such abuse.

Not unrelated to a lack of respect are the weekend murders in El Paso and Dayton. This violence again begs the question “When evil strikes, where is God?” I wrote a short article on LinkedIn. Click the link to read it.

Blue Watch, an organization based out of Alabama, ran this article in their newsletter:

Thanks, Burke for providing the books to the officers. Keep the Auburn officers in your prayers.

Update: Last month I reported on the horrific attack on Officer William McKeon of Sour Lake, TX. Officer McKeon remains in a rehabilitation center in Houston. He is now breathing on his own, but still faces months of rehab relearning basic physical functions. He suffers from memory loss and his family requests prayer for his recovery.

Tad, from Ohio, ordered ten copies of Winning a Gunfight through The Strong Blue Line website. Tad wrote this: “Our church safety team is sponsoring training with Dave Spaulding from Handgun Combatives. It’s a two-day training course and we’re sponsoring local LEOs [law enforcement officers]. The team will pay the course tuition. Your book will be included in a gift box we’re giving to every LEO who attends. Thank you!” What a great way for a church to connect with their local officers!

Last month while traveling through the great state of Wyoming, I was able to give a copy of Winning a Gunfight to a state trooper. Trooper Walker was professional and very friendly…I’ll not tell you how we were introduced, let’s just say he stopped me and welcomed me to Wyoming. I encourage you to keep a couple extra copies of Winning a Gunfight on hand to give officers you might “happen” to come across in your travels.

The Windcrest (Texas) Police Department received 26 copies of Winning a Gunfight. This was enough books for each officer on the PD. Chief Darrel Volz was my sergeant when I worked homicide and his administrative Sergeant Jimmie Cole was a fellow detective. My parents attend church in Windcrest and wanted to ensure the officers received the books. Thanks mom and dad for delivering the books!

This month Cop Church is hosting a bar-b-que for officers in the Idaho Falls community, we look forward to a great time of fun and food! Pray for your police.