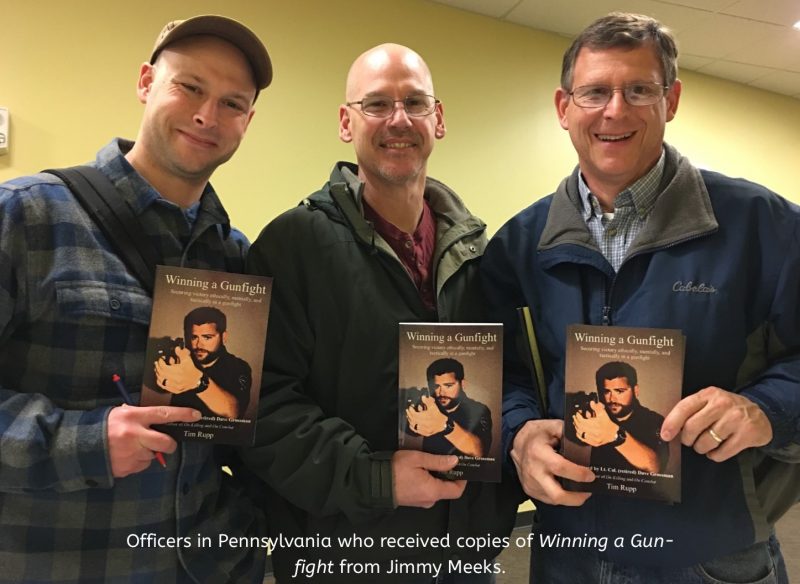 The most popular part of Winning a Gunfight is shaping up to be the spiritual and ethical implications of using deadly force. When talking to officers who have read the book, I make it a point to ask what they liked most. The most popular response centers around the spiritual. This surprised me, I thought the tactical would rank first. One officer commented, “I never really thought about the spiritual side of things.” Another officer, who is a thirty-year veteran, commented that he really liked how the Judeo-Christian position of defending innocent people with the use of deadly force was explained and defended. He said, “I always knew it was the right thing to do, but now that’s been affirmed.”

I’m discovering that many officers haven’t considered the spiritual implications of using deadly force. Also, I’ve noticed over the years that discussion about the spiritual is avoided by police firearms and tactics instructors. The reason for instructors avoiding the subject is two-fold. One, they feel inadequate (and very well may be) to address the issue. And two, their fear (no doubt spawned by their agency or the courts) of endorsing a religious belief in violation of policy or political correctness. My prayer is that Winning a Gunfight will help drive the conversation and make fertile soil for the gospel.

2-1-17 Sheriff Paul Wilde (Bonneville County, ID) called and asked if I would donate of a couple copies of Winning a Gunfight to give away at the Western Sheriff’s Association Conference in March. Sheriff Wilde said this venue will provide more exposure for the book. As you imagine, I was more than happy to donate books for the conference. I looked up the Western Sheriff’s Association online and found the association was formed 22 years ago, and has over 300 members. Sheriff Danny Glick of Laramie County, Wyoming is the current president. After finding Sheriff Glick’s contact information I mailed him a book hoping he would read and promote it. I followed-up to see if he received the book, he responded via email: “Morning Tim, I did receive my copy, thank you very much. I also thank you for your donation to the Western States Sheriffs Conf. I’ve not had a chance to read your book yet but I look forward to doing so. Thank you, Danny.” Pray that connecting with these sheriffs will bear fruit!

2-5-17 In chapter nine of Winning a Gunfight, I detail how Doug Dryden of Highlands Tactical teaches “combat” or “instinctive” shooting. Doug travels far and wide teaching both law enforcement officers and civilians the art of instinctive shooting. In early February, Doug was in Ronan, Montana teaching his class. He sent me this email, “When I walked into their [Ronan PD’s] office to teach the classroom portion of the class, I saw that each of the four officers had a copy of your new book on their desk. So, I asked how they got them and they said a local pastor provided them.” That’s the Strong Blue Line ministry in action! Pray for the safety and spiritual welfare of the Ronan officers.

2-7-17 Mark R. of Mesa, Arizona ordered five books through the Strong Blue Line website. Mark said the books will be given to five Mesa Police Department officers who work closely with their church’s security team.

2-11-17 Jimmy Meeks, in his travels in the East with Lt. Col. Dave Grossman and Carl Chinn, gave out forty copies of Winning a Gunfight at a Sheepdog Seminar held at Calvary Baptist Church of Easton, Pennsylvania. See photo above.

2-11-17 Heidi Hogan is the wife of a Kansas police officer with a heart for police marriages. Heidi has a ministry with Badge of Hope Kansas City that hosts seminars to promote strong marriages for law enforcement couples. Heidi writes, “In July 2016, we held our second annual Badge of Hope Law Enforcement Marriage Seminar. We had over 170 law enforcement officers & their spouses from 45 agencies and 10 states.” This year’s seminar will be in Lenexa (Kansas City), Missouri, in July. The featured guest speaker is Lt. Col. Dave Grossman. After listening to Heidi in an interview I contacted her to see about providing a copy of Winning a Gunfight to the couples attending the seminar. We agreed to try and raise the money to provide 200 copies to the couples attending the conference. Heidi also invited me to come in person to connect with the officers and personally give the books to them. Please consider donating toward this initiative. You can donate online, in the comment box just write, “KC Conference.”