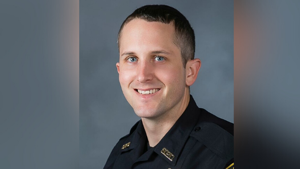 Shots rang out across Springfield, MO late Sunday night, March 15th, 2020. For twenty minutes, police dispatchers were flooded by calls for gunshots being fired at various locations throughout the city. “In essence we had a roving active shooter moving from the southside of the city up,” Chief Paul Williams later reported. The last calls described a vehicle crash and shots fired at the Kum-n-Go convenience store in the 2800 block of East Chestnut Expressway. Joaquin Roman, 31, was the suspect who had been driving around the city and indiscriminately shooting. The mayhem ended when Roman crashed his car into the Kum-n-Go store. He bailed out of the car, ran inside, and started shooting at anyone he saw.

Officers Christopher Walsh and Josiah Overton responded. Roman shot four citizens before the officers arrived. Officers Walsh and Overton entered the store and immediately engaged the gunman. Both officers were shot in the exchange and went down. Other officers soon arrived and extracted the wounded officers. Roman was found deceased from an apparent self-inflicted gunshot would. Officer Walsh and three citizens were fatally wounded.

U.S. Senator Roy Blunt commented, “Officer Walsh lived a life of service to his country and his community. As a police officer and U.S. Army veteran, Officer Walsh exemplified the best of our nation.” Officer Walsh, 32, left behind a wife and daughter. The three-year veteran officer was also an Army veteran. Pray for Officer Walsh’s family and the Springfield PD.

Last year, I gave several copies of Vengeance is Mine to Pastor Mike Glaser who serves as an inmate chaplain at the Bonneville County Jail. In early March, I received a letter from an inmate named Corrie. Here’s part of what he wrote, “I am an addict in recovery from meth addiction, I hate this drug more than anything! I am in medical and have a c-pap and very limited space with 3 guys. I am reading your book ‘Vengeance is Mine’ and really enjoy your writing…I was kind of wondering if you have more books out that you have wrote? If so, I was hope[ing] for your help with some biblical—GOD in mind books you have written.” I gave Pastor Glaser a copy of Warriors for the Faith and Vengeance is Mine Too to give to Corrie. Pray the books will be a springboard to a reformed life for Corrie.

The Coronavirus has put a dent in Winning a Gunfight seminars and speaking opportunities. An April seminar scheduled in Idaho Falls was canceled as were two May seminars planned in Minnesota. Also cancelled was a speaking engagement at a Law Enforcement Memorial luncheon sponsored by the St. Louis County Law Enforcement Chaplaincy in Duluth, MN. We hope to reschedule the speaking events.

The International Conference of Police Chaplains also canceled their Annual Training Seminar in Orlando, FL, where I was scheduled to present a Winning is More than Surviving chaplain seminar. Along with these several churches were also forced to cancel my presentation.

No one would have ever thought that we’d be shutting down nearly all public face-to-face interaction. Professional sporting events, schools, and even churches are all victims of the pandemic that has spread across the globe. When this hit, I thought about what James wrote, “Come now, you who say, ‘Today or tomorrow we will go into such and such a town and spend a year there and trade and make a profit’— yet you do not know what tomorrow will bring” (James 4:13-14a). No, we don’t know what tomorrow will bring. Things may get worse; things may get better. This may go on for days, or it may be weeks, or longer. But this we do know, as Isaiah wrote “For I, the Lord your God, hold your right hand; it is I who say to you, ‘Fear not, I am the one who helps you’” (Isa. 41:13).

Last month (before the gathering restrictions) we decided to suspend Cop Church services until we determine the most effective way for us to minister to law enforcement officers and their families in our community. Pastor Jonathan Parker (Cop Church Chattanooga), Pastor Glenn Herschberger, and I met via a “ZOOM” video conference and Glenn shared with Jonathan and I his vision for Cities Cop Church in the Twin Cities. Glenn plans to launch the new church in October. Please pray for this new ministry.

Daniel Blevins, the National Security and Safety Director for CV Ministries contacted me for an interview about Pistol in the Pulpit. Click here to listen to the podcast. Daniel puts out a weekly podcast directed at church security.

As mentioned in previous newsletters, the Law Enforcement Chaplaincy of Idaho has been founded and we plan to be operational in Southeast Idaho by year’s end. Our first training academy for Community Chaplains is scheduled to start soon. Pray for your police.