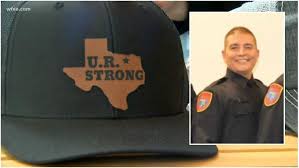 It was just after midnight on Tuesday, October 29, 2019 when Denton (TX) Police Officer Urbano Rodriguez pulled over a white 2005 Chevy Malibu for expired license plates. Officer Randy Cole responded as back-up. Rodriguez contacted the driver, 44-year-old Michele Stacy, a person Denton officers were all too familiar with. Antwon Pinkston (33) sat in the passenger seat. The officer asked about the smell of marijuana coming from the car. Pinkston suddenly pulled a gun and started shooting. Officer Rodriguez went down. Officer Cole returned fire and hit one suspect in the arm. Cole ordered the two suspects to show their hands, but they ignored the order and fled south on IH 35.

Cole radioed for help, and consoled his downed comrade, who was hit in the head and leg, “Stay with me, buddy.” A short time later, the suspects were intercepted by officers from the Carrolton and Farmers Branch PDs and were arrested without incident. Both suspects were treated for non-life-threatening wounds and booked into the Denton County Jail.

Law enforcement officers have a unique bond. There are many dangerous occupations, but policing is unique because the threat of harm is intentional and from another human, and may even be a person the officer knows. Whether a person is hurt in an industrial accident or being shot by an armed aggressor, the physical injuries are very real. But interpersonal human aggression is different. Just like pulling the trigger on another human being is different from shooting a deer, so too being attacked by another human is different than harm caused by an accident.

Pastor John Crawford of the Apostolic House of Prayer in Rupert, ID ordered 60 copies of Winning a Gunfight and ten copies of Winning is More than Surviving. Pray for Pastor Crawford’s ministry there and the officers who received the books.

In late October, I was privileged to speak in several San Antonio area churches and present The Strong Blue Line ministry. The Texans were very hospitable and supportive of the ministry. Bexar County Sherriff Javier Salazar was a special guest at Faith Bible Church and Pastor Lee Patton gifted him with a Bible. Sheriff Salazar graciously accepted the gift and assured us that it will be well read and requested prayer for himself and the BCSO. You might recall, last year, Sheriff Salazar ordered 100 copies of Winning a Gunfight and distributed them throughout his agency. Please pray for the BCSO and Sheriff Salazar as he leads his agency through difficult times.

A couple years ago, my good friend Kenny Evans purchased over 70 copies of Winning a Gunfight and gave them to his hometown PD of Winchester, VA. Kenny and I served together on the San Antonio PD and for the Defense Intelligence Agency. Last month I made a quick trip to Winchester to officiate the funeral of Kenny’s father, Vietnam War veteran SMSGT Kenneth W. Evans, who served 39 years in the Air National Guard. It was an honor to officiate the funeral of an American patriot and the father of my friend.

Have a Merry and Blessed Christmas!