“I am for peace, but when I speak, they are for war!” the ancient psalmist writes.   Men have been fighting (and killing) each other since the dawn of time; and there’s no indication things will change anytime soon, even as good men strive for peace. Should we seek peace? Absolutely! As a Christian I agree with the biblical mandate, “If possible, so far as it depends on you, live peaceably with all.”  But, in the event you are not able to live in peace and find yourself in a gunfight are you prepared to win? 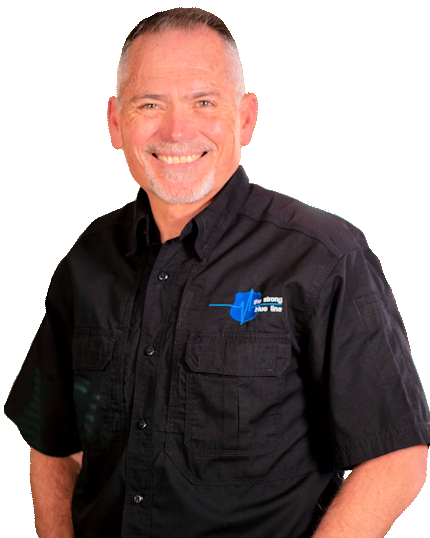 Tim Rupp was a career police officer before being called into fulltime vocational ministry. He enlisted in the Air Force after graduating high school. After his enlistment, Tim joined the San Antonio Police Department (SAPD) and gave 24 years of dedicated service before retiring in 2007. During his SAPD career he worked as a patrol officer, homicide detective, patrol sergeant, sex crimes sergeant, police academy supervisor, and internal affairs sergeant-investigator. He continued his law enforcement service as a reserve deputy with the Bonneville County Sheriff’s Office, Idaho from 2009-2020.

Before retiring from the SAPD, Tim was called to pastor Elm Creek Baptist Church in La Vernia, TX, just outside of San Antonio. Following his retirement in 2007, he was called to pastor fulltime in Idaho Falls, where he pastored until 2020. In 2016, Tim founded The Strong Blue Line Ministries to reach law enforcement officers. In 2017, he and a group of active and retired police officers planted Cop Church Idaho Falls. In 2020, Tim cofounded the Law Enforcement Chaplaincy of Idaho and committed to serving LEOs and their families fulltime. He is available to teach seminars for police officers, churches, and men’s groups. For more information or to contact Tim, go to TheStrongBlueLine.org.

Tim is an ordained minister with the Christian and Missionary Alliance and serves as a Law Enforcement Chaplain in SE Idaho. He graduated from Texas State University (Master of Science in Criminal Justice), Southwestern Baptist Theological Seminary (Master of Divinity and Master of Arts in Christian Education), and Western Seminary (Doctor of Ministry). Tim has authored several books, including Winning a Gunfight and Suicide is Not an Option. He is married to Sherry and they have three children, Christina, Aaron, and Emily and several grandchildren.

Michael Jenkins is a writer and editor based in Wilmington, North Carolina.

"Winning a Gunfight is a damn good read: well presented, well organized, and well thought out."

Jonathan Parker is a professional communicator, trainer, podcaster, and pastor who is passionate about serving law enforcement officers and their families.

"It is highly recommended for officers, spouses, or others who want to master the basics of shooting and train properly should they engage in a deadly encounter."

Listen to the Podcast →

US Army, Retired Denominational Chaplain Endorser for The C&MA
Deployed to Iraq in 1991

Tim Rupp addresses issues that are relevant today. Winning a Gunfight does not seem like a book a retired military chaplain would endorse. However, Rupp is speaking to us in terms that come natural for him on every level. He is a trained professional who is training us. He is the pastor of an Alliance Church and speaks to the needs of the soul as well as the body. He challenges the very idea of winning. This book is a textbook, a history book, and a book that will, yes, challenge what it means to be a winner in life. I encourage anyone who has faced life and death situations and survived to read this book. It will ask some difficult questions. Did you just survive or did you win? This book may take you deeper than you expected or wanted. You will find it worth the risk.

In Winning a Gunfight Dr. Rupp instructs those that value peace, liberty, and freedom to be prepared and not fear when evil comes to “kill, steal, and destroy.” His use of real life stories and practical applications in the fundamental principles and latest techniques of winning a gun battle inspires and informs, making Gunfight a must read. Life is all about preparation!

Since 1987 Dr. Tim Rupp and I have played, hunted, cried, and prayed with and for one another. But more than that, we also worked side by side as police officers, detectives, and sergeants in the San Antonio Police Department. From the time I met Tim he was a shining example of a Christian whom I wanted to learn from and get to know better. After years of developing a genuine relationship, I consider it a true honor to be called his friend.  Besides all of the other aspects of Tim’s life where he has been called to be an outstanding leader (Christian witness, pastor of his church, husband, father, grandfather, friend), I also know him to be a passionate teacher and educator. When Tim decides to teach something, it will be well researched and presented. After reading Winning a Gunfight, Tim has done it again! If you are considering purchasing a concealed handgun license, purchasing a gun for home protection, or entering any profession where you may be required to carry a firearm, Winning a Gunfight by Dr. Timothy Rupp should be required reading before you make that life changing decision! Dr. Rupp examines all aspects of what is required to Win the Fight beyond just surviving the encounter; the epilogue is golden.

Even as a young USAF Security Police Officer, Tim’s approach to officer safety and insight into Winning helped others to engender a career-long mindset and inspiration to go above and beyond in training and preparation for the ultimate event. This book is a culmination of decades of experience and should be a mandatory primer for both military and civilian peace officers.

Winning a Gunfight is a well-written account of one man’s direct knowledge gained by living through actual police events. I met Tim Rupp 26 years ago while serving in the United States Air Force Security Police Squadron at Brooks AFB, Texas. Tim is a true professional with an outstanding reputation. He is extremely knowledgeable when it comes to police actions and spiritual advice. This book effectively presents the information and explains the ethical, mental, and physical aspects of being able to win a gun battle.

Winning a Gunfight is a must read for new law enforcement officers and those who decide to carry a firearm for personal protection. This easy to read book informs the reader of the essential aspects of using force—the ethical, mental, and tactical. And most important of all—understanding your own personal limits. Tim has the unique perspective of adding his actual experience as an officer involved in a shooting, a homicide detective, an internal affairs investigator, and a pastor.

Winning a Gunfight is a must read for anyone involved in combat training, or who could find themselves in a gunfight. Tim Rupp provides a holistic approach of addressing the body, soul, and spirit. This style is augmented by Tim’s varied training, education, and experience gathered over a lifetime. He served in the military, was a street cop involved in a shooting, and worked as an investigator of officer-involved shootings from two perspectives: as a homicide detective; and as an internal affairs investigator. He has also trained numerous law enforcement personnel in physical fitness, firearms and tactics. His service as a senior pastor provides the necessary connection that allows Winning to reach beyond the immediate aftermath of a gunfight and into surviving with more than just your physical life.

As I read Winning a Gunfight I was surprised to find a discussion of ballistics included, as this is the one area most agencies fail to cover in training. As a 34-year veteran of law enforcement and the military, I am a strong believer in always returning to the basics in firearms training. That being said, in this book the basics are covered and the difference between qualification and training should jump off the page as one reads through each chapter. Tim, through his sharing of personal experience in lethal and non-lethal encounters, only serves to validate the need for realistic drilling. Training in Reality Based Scenarios and sound tactical movements such as: drawing from the holster; seeking cover and concealment; and incorporating instinctive shooting drills will only increase your survivability in that crucial moment. Recognizing the ethical, mental, and tactical aspects involved in a gunfight, and using that understanding to assess your own personal limits, will allow you to train for victory rather than become a statistic if ever faced with a lethal threat. This entire volume seeks to say in very simple language “Train As You Fight” or “Train TO WIN.”