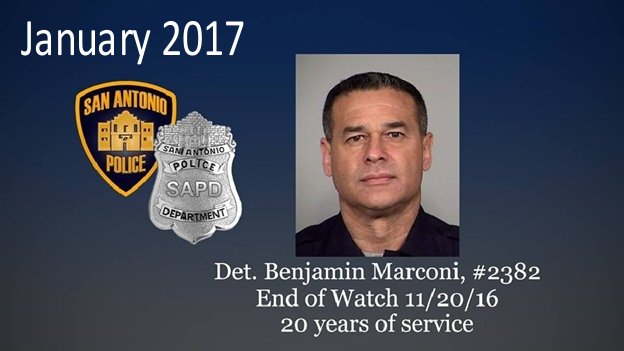 The tragic murder of San Antonio Police Department (SAPD) Detective Benjamin Marconi in late November, prompted me to contact an old friend and former SAPD colleague, Ken Evans. Ken and I have been out-of-touch since he moved to Virginia in 2003 to take a job with a federal intelligence agency. After catching up with Ken, he asked about Winning a Gunfight and I shared with him the Strong Blue Line ministry. As a police officer, Ken was himself involved in a shooting when a knife wielding assailant attempt to stab him. Upon hearing about the ministry, he immediately wanted to be part of it, I directed him to our website. The next day Ken called and told me he wanted to purchase 76 books to give to the Winchester, VA police department! Not only that, Ken contacted the local media in an effort to promote the book and ministry. Here’s a link to the video.

Detective Joe Dubs (San Antonio PD) provided copies of Winning a Gunfight to the pastoral staff at Cornerstone Church in San Antonio and they are exploring the possibility of supporting the ministry.

12-3-16 The original Amazon price for the book was $25, full retail price. A new Amazon program enabled me to drop the price to $15.99. This is a great benefit to both the customer and The Strong Blue Line ministry. The cost for ordering 1-4 books directly from us is $15 per book and is shipped media mail, which usually takes 5-7 business days. It is also time consuming packing and shipping small orders. The Amazon price is only 99¢ more and offers free two-day shipping to Prime members. Also, please leave a book review on Amazon. You need not purchase a book through Amazon to leave a “five star” review. Many people make the decision to purchase or not based on the reviews. Click here for the Amazon book link.

12- 5-16 My dad, who lives in a small community a few miles southeast of San Antonio, made an appointment with the local chief of police. Not knowing how many officers this small city employed, he took a dozen copies of Winning a Gunfight to the meeting. At the meeting the chief, who turned out to be a retired San Antonio police officer that I knew well, said they had six regular and six reserves—an even dozen! But it gets better. Dad shared with him that the book was more than about winning a gunfight; it was about victory over the final enemy—death. Dad shared the gospel message and the chief accepted the Lord as his Savior! Can you believe it? A co-worker of mine receives the Lord through the witness of my dad, because of a book I wrote—coincidental?

12-6-16 I met with Pastor Keith Stayman of the Howe Community Church and shared the ministry with him. Keith immediately purchased five books to give to the deputies of Butte County. A few days later Keith said he had delivered the books to the appreciative deputies.

12-9-16 Matt Fluke of Idaho Falls read Winning a Gunfight and purchased five books to give to Homeland Security agents stationed in IF. Matt reported that the agents were extremely grateful to receive the books.

12-12-16 I spoke with Rev. Chris Gorman, the North American Baptist Regional Minister for the Northwest Region. He was very interested and promised to talk more about the ministry after the first of the year. I sent Chris a book.

12-14-16-16 I attended police use of force training class in Meridian. The class was an instructor class for police who instruct use of force in their own agencies. Eight of the student-instructors purchased books. While in Meridian, I contacted a couple of people from Cole Community Church who will present the ministry to their church.

12-15-16 Received a commitment to supply 10 books to the Boise PD from a retired police officer.

12-19-16 This is crazy! We received an inquiry about purchasing books through the River of Life Church website from Hermann, an airline pilot for a major US Airlines. I called Hermann and he said he was familiar with Lt. Col. Grossman and his work studying deadly force incidents. Hermann said he wanted to purchase the book for everyone in his adult men’s Sunday School class. They have been discussing the use of deadly force from a biblical perspective and wanted to work Winning a Gunfight into the discussion. I asked how he heard about the book and he said a friend of his works where I have books printed and told him about the book. Hermann obtained a copy, read my bio and contacted the church! Hermann ordered 16 books as Christmas presents for his class.

12-26-16 A lady from Wyoming said her husband had received Winning a Gunfight as a gift and she and her husband wanted to purchase five books to give to others in the small community of Thayne.