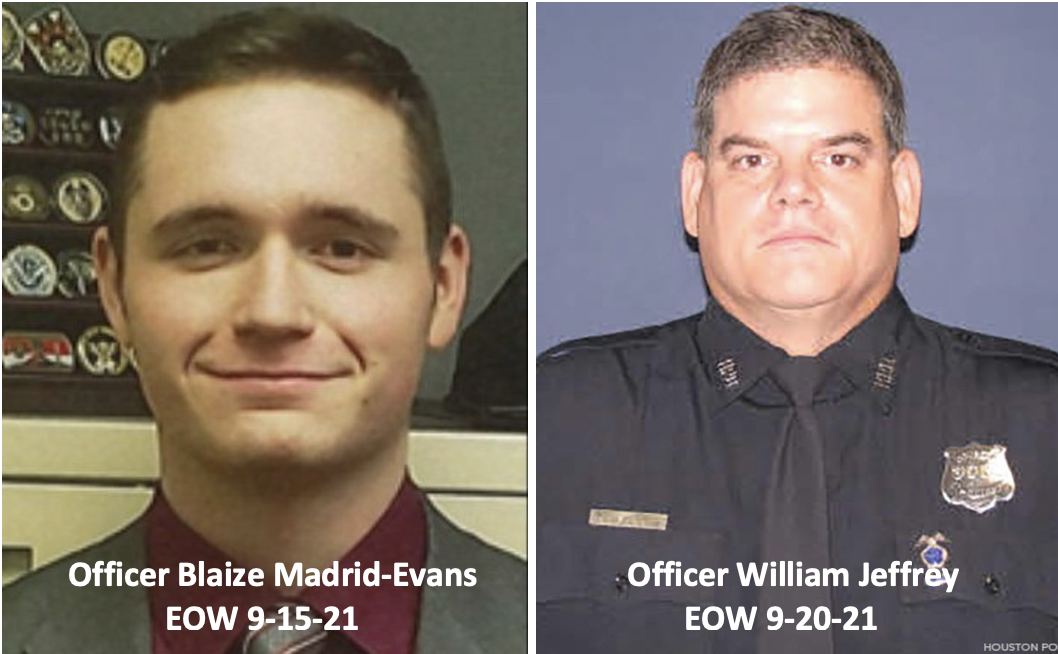 Tragedy struck officers at both ends of their careers last month. On September 15th, at around 11:30 am officers in Independence (MO) received a call that a wanted man was wandering around in a residential area. Independence PD Officer Blaize Madrid-Evans and his Field Training Officer were dispatched. Twenty-two-year-old Officer Madrid-Evans was only two-months out of the academy, and still in training. The suspect, Cody Harrison, 33, opened fire on the officers, killing Madrid-Evans. His partner returned fire and killed the assassin. Officer Madrid-Evans is survived by his parents and fiancée.

Five days later, veteran Houston (TX) PD Officer William Jeffrey and Sergeant Charles Vance were serving an arrest warrant on a subject charged with drug violations. The suspect opened fire on the officers and both were hit. Officer Jeffrey died from the gunshots he sustained. The suspect was also killed during the shootout. Sergeant Vance was hospitalized in stable condition, and full recovery is expected. Officer Jeffrey was a 31-year veteran of the HPD. He is survived by his wife, who recently retired from HPD, and his daughter. Please say a prayer for both the IPD and HPD and the families of the slain officers.

I write this letter from Rapid City, SD. I’m here at a pastors’ conference for the Rocky Mountain District of the Christian and Missionary Alliance (CMA). While I no longer serve fulltime as a CMA pastor, I’m still ordained through them, and Cop Church Idaho Falls is a CMA church plant. From Rapid City, I’m heading east to Minneapolis (MN) where On Sunday, October 3rd, I’ll attend the opening of Cities Cop Church in the Twin Cities. Please pray for pastor and retired officer Glenn Herschberger and his team as they seek to minister to officers and their families. On October 4th, I’ll be at Mound View PD (a suburb of Minneapolis) for a Winning a Gunfight seminar. After that, I’ll be heading back to Idaho.

September was a busy month of ministry for the Law Enforcement Chaplaincy of Idaho. Chaplains made several calls that included a fatality school bus accident and the sudden death of a young infant. In both cases, as well as with the numerous other calls, victims and family members were ministered to by our chaplains. Early in the month, Chaplains Christa Trinchera and Nancy Amos were meeting with the Swan Valley Fire Department (SVFD) about the possibility of serving the rural agency when the SVFD was dispatched for a fatality accident. The chaplains responded alongside the SVFD and rendered assistance and comfort to the survivors of the crash. Other chaplains were dispatched to assist Bonneville County SO with next-of-kin notifications. Please pray not only for the victims and survivors of these tragic events, but also pray for the chaplains. Chaplains not only minister to others, but themselves deal with the trauma of tragic events and death.

Our joint 9-11 service with Watersprings was a great service, with nearly 600 in attendance. Sandy Bird decorated the sanctuary, the worship team did a great job, as did everyone who was involved. Andrew Crawford (Watersprings’ media guy) did a great job putting together a short video of the attack. Finally, I shared a message from Luke 13:1-5, “Why do bad things happen to good people?” If you missed the service, you can watch it by clicking here. If you can’t make it to Cop Church in person, be sure to catch the video on Facebook.