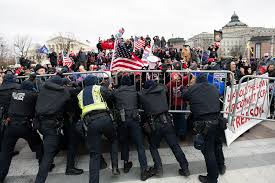 The capitol building overrun by rioters, police officers hurt and killed, unarmed citizens shot…. Did you ever think you’d see such chaos in our capital? I never did. While the new president and his administration will no doubt change the direction of our country, what does it mean for law enforcement? Some agencies will be greatly affected, others not so much. But all law enforcement officers (LEOs) may face tough decisions—constitutional decisions—in carrying out their duties. Pray that our LEOs will have the wisdom and discernment to make the right decisions.

On Wednesday, January 13th, at about 4 pm, the Los Angeles Police Department (CA) received a call for a male exposing himself to children. When officers arrived, they were confronted by Brandon Wheeler who was armed with a chain and padlock. Wheeler refused orders to standdown and the officers deployed a stun gun, which had no effect on the assailant who went wild. Wheeler suddenly and without warning, brutally attacked the officers, striking both officers several times with the padlock. After a fierce battle, the officers were finally able to pin the suspect to the ground, but still struggled to handcuff the uncontrollable Wheeler.

Fortunately, an unknown citizen stepped in to assist the officers. Wheeler was taken into custody and booked. The officers were treated for non-life-threatening wounds. You can see a short video of part of the fight the officers were in by clicking here. Stun guns don’t always work. The media report doesn’t indicate, but it appears the suspect in this case was hyped-up on drugs. Most people don’t realize how fast things can go bad for officers. The Good Samaritan wasn’t identified, he just helped out and went along his way. It encourages officers for citizens to show their support.

Last year I wrote Suicide is Not an Option, Hope in Man’s Search for Meaning to specifically address the terrible killer of far too many people. Although written with officers, their families, and those who minister to officers in mind, the book is a resource for anyone struggling with thoughts of suicide or those who want to minister to those who struggle. It’s available on Amazon or in bulk through The Strong Blue Line website.

Last summer Gary Austin of TheRev radio, a Christian station based in Idaho Falls, approached me about doing a radio show for law enforcement officers. I hesitated for a number of reasons. Things like time, ability, and questioning if it would be productive. Over the last several months we’ve talked about it and decided to launch Dog Watch on February 20. Dog Watch will be a 30-minute show aired on Saturday mornings at 2 am (MST) and re-aired on Sundays at 2 am. The show will also be available to download as a podcast. For more information about the show click here.

The Law Enforcement Chaplaincy of Idaho continues to minister to our community at large and to our law enforcement officers. Due to confidentiality concerns, I am unable to share with you the impact we are having, but rest assured, LECI chaplains are impacting the community with God’s love. Last month, the Idaho Falls PD asked chaplains to help out with scenario training. It was an opportunity for chaplains to see and participate in police shoot-don’t shoot and other tactical training. Chaplain Christa and I also recorded a video for Bonneville County SO to use for their deputies in their annual training. On March 9th, we’ll begin a Community Chaplain Academy. If you live in Eastern Idaho and are interested in becoming a volunteer chaplain, you can find more information by clicking here.

In the late 1970’s when I was finishing up my last two years of high school, my friends and I often spent our weekend nights at the dance halls around San Antonio. One of my favorite performers was Clifton Jansky and the Drifters. In 1980, Clifton recorded a song that became a hit in South Texas, Amarillo by Morning(later recorded by George Strait). Four years later, Clifton surrendered his life to Christ and soon gave up country music. But a short time later he reentered the music scene signing Christian Country Music and soon found himself traveling worldwide singing for Jesus. Last year I contacted Clifton and started to make arrangements for him to come to Idaho Falls. Cop Church, TheRev Radio, and Westernsprings Cowboy Church welcomes Clifton Jansky for a night of worship on Sunday, March 7th at 6 pm. If you are in Eastern Idaho, make plans to join us! For more information, visit our Cop Church’s Facebook page.Pray for your police.